We are Strictly Fine. 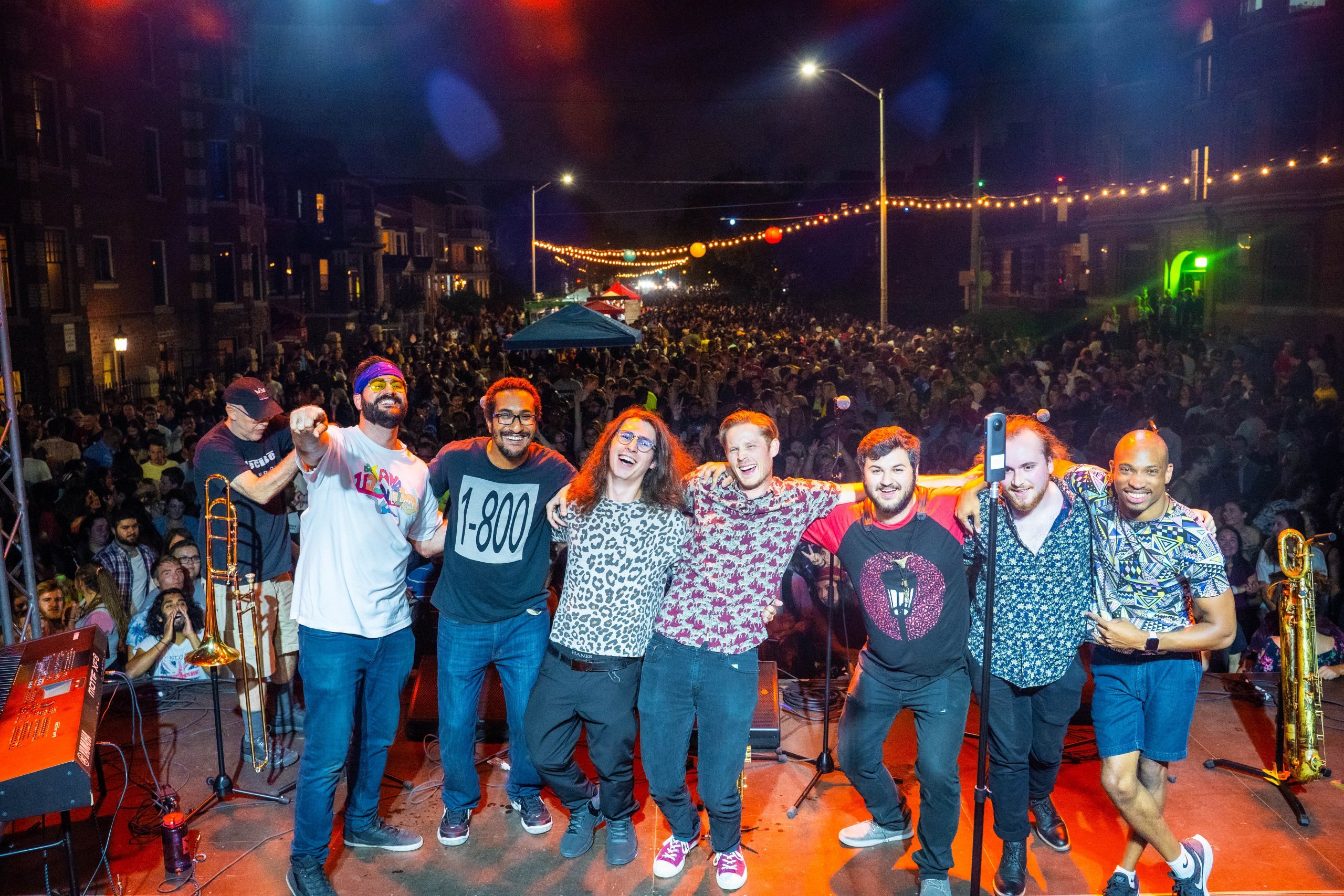 We are a Detroit based band providing unlimited funk and soul, for the low low price of hire us at a competitive rate you cheap piece of ... ahem.. Anyways. There are like 7 people in this band, and at least 5 of them have car insurance. Car Insurance. In. Michigan. Do you know how expensive that is? It is both highly priced for legitimate reasons regarding the state’s crumbling automotive infrastructure *and* artificially inflated by insurance companies without effective regulatory oversight. It’s a double whammy.

In an actually very real way though:

Strictly Fine is a talented and professional group of musicians that you can hire to perform at your festival, funeral, venue, house party, wedding, corporate event, quinceañera, cookout, graduation, bar mitzvah, bat mitzvah, or backyard. If you have the space, the money, and the people you want to get dancing, we will show up and we will crush it. We are a well oiled Funk Machine Grande Supreme, double dipped in a vat of funk acid and served with Chicken Sandwiches and Mario Kart. Audio engineers hate us until we start playing and win over their icy jaded hearts and it all usually works out.

But who is doing the crushing it?
That would be the following seven bad (read: good) dudes:

1. Rick Enrico Morrone (aka Ricky Morrone aka The Real MVP)

•He slaps the bass. He slaps your face if you’re into that. He is a certified video wizard. He has the best basement rehearsal hang space this side o’ the Mississippi. He sings. He dances. His dog Mowgli is always as hype as you should already be about this band. He’s a good kind person and a nice sweet boy and I love him and you’re wrong if you don’t. And I’m talking about Rick, to be clear. At any point in time he may arrive to the gig on crutches since his knees are GONE from college athletics but that doesn't stop him from laying down burning basslines for you to eat up nom nom nom nom

•God damn it he is good at the drums and cymbals. All sorts of good at em. Really. Challenge him to a street rules shaker shake off if and when you want to humble yourself at the altar of sixteenth notes. Come to a show and you might find yourself being like “wow, my face is melting because of how hard he’s fucking killing it on that weird tambourine right now”, and then he will stop the show tell you that its actually a Pandero, start riffing about L. Ron Hubbard’s lifetime achievement award in tax evasion, and then continue to melt your stupid face off. Call your lawyer.

•Did I mention we have two drummers? Because we have two drummers, and one of them is Tiger Woods Jr Jr. This opens up many deeply funky possibilities that can and will only happen when you have two drummers. When not relaxing in his flagship underwater golf course/casino , TWJRJR can be found giving Siri voice commands, being better dressed than you, and absolutely shredding on the kit. He communicates exclusively through gifs, cackles, and pocket. Off stage his Airpods WILL be in and you WILL wait until he removes them if you wish to speak at him.  Do you know who you're speaking to? It's Tiger Woods fucking Jr fucking Jr, bitch.

•Low key might actually be the reason this band exists at all. He plays the big saxophone and no, you’re not allowed to touch it. You cannot challenge or compromise his flawless dad energy. He tapes his charts the right way. He is an unlicensed and honorary master tour guide of Detroit and the surrounding entire fucking state of Michigan. He knows more about your car than you do. He can write a perfectly harmonized horn soli to literally anything and will if you ask him real nice.  Don't try to remove the dog hairs from his clothes, because he gave up on that a long time ago.  Bring Bulleit Rye.

•He’s 6’ 4”, in case you were wondering why he was so much better looking than you. He’ll take you to New Orleans on trumpet and leave you there. He’ll croon you out of your shoes so you can take your pants off easier. He’ll show you how to dance, break down the nuanced failings of bureaucracy in higher academia, and allow you to catch these hands in a most gracious, loving way. He will beat you in golf while simultaneously looking like anything but a person who plays golf.  Try him.

6. Chris Kendall (aka Chris Muthafuckin' Kendall aka Watt Djosef “Too Many Things” Watch)

•I don’t use the word “genius” lightly, so you can believe me when I say that you’re a fucking idiot if you don’t fuck very heavily with Chris MF'n Kendall. It doesn’t take a genius to see how obnoxiously talented this man is. He will dunk on you, and I mean that both literally and figuratively. On trombone. In the paint. On these vocals. In any 2k game. Just relax and take the L. If he’s not driving between Detroit and A2, Chris can be found eating loose hamburgers, forgetting his trombone, and casually doing runs with a buttery smoothness that makes you seriously question your sexuality, religion, and plans for retirement.  Chris. Muthafuckin'. Kendall.

Its a Powerful Name

•Thats me. I play keys and guitar and can almost sing and I write songs and I can’t stop making noise all the god damn time and the boys listed above only tell me to shut the fuck up like 15% of the time and thats how I know that they love me. Bread is the only thing I care about. Trust that I have a TED Talk locked and loaded for any subject you bring up. I am undefeated in rock, paper, scissors. I will give you a ride to the airport and cook you breakfast for dinner. Given enough time, I will forget to text you back. It’s gonna be okay.  (editor's note: DO NOT CHALLENGE MIKE TO ROCKET LEAGUE IF YOU WANT TO LIVE YOUR LIFE WITHOUT TOTAL EMBARRASSMENT AND SHAME)

We are all real living breathing working adult musicians with hundreds of performances, multiple degrees, and decades of experience between the lot of us. We got this, and we would love to share it with you.

If you want to Move Dat Ass, holler.